History
In 1892, Bishop Gibney, purchased a 100,000 acre pastoral lease named Lombadina approximately 60 kilometers to the north of Beagle Bay Mission. the property included a dwelling and a shearing shed, cattle, sheep, 2 horses and 2 schooners. the latter were important due to the isolation of the property.

The Pallotine priests based at Beagle Bay Mission were finding it difficult to develop Lombadina Mission due to lack of money and staff and the property was sold to a Thomas Puertollano. Thomas Puertollano, a Manilaman, also met with difficulties as he was classed 'Asiatic' and could not obtain a permit to either employ or exert any authority over the local Aboriginal people who gathered there.

In 1910, Thomas Puertollano suggested that he run Lombadina as an outpost if the Beagle Bay Mission and Fr Nicholas Emo settled at Lombadina taking charge on 1st January 1911 and set to work to build up the mission.

Fr Nicholas was greatly assisted in his work when 3 St John of God sisters arrived at Lombadina Mission in 1913. the Puertollano family vacated their small house fort he sisters to use until a convent was built for them. Paperbark huts were used as a school and dining hall. The early years at Lombadina were hard, with food shortages, no doctor or hospital and constant difficulties in communication with Broome and Beagle Bay, which could only be reached by using a small boat or by donkey cart.

On March 8 1915, Fr Nicholas died. His health had been severely affected by the strenuous work and travels he undertook. Fr Thomas Bachmair, a Pallotine priest based in Beagle Bay, was placed in charge of the mission at Lombadina. Thomas Puertollano sold Lombadina to the Pallotines and in 1918 moved to Broome to live. By 1918 the health of Fr Bachmair had seriously declined and shortly before his death he returned to Beagle Bay to see the nearly completed Sacred Heart Church which he designed.

About this time the Pallotine missionaries were facing some opposition and it appeared they would have to leave. As a result an invitation was extended to the Salesian Order. The Pallotines remained at the Missions and worked with the Salesians. The Salesians, however, only stayed a short time and returned to Italy in 1928.

The bush church at Lombadina Mission was built in 1932 by BR Joseph Tautz. Br Joseph was affectionately know as 'Ginger Joe' and had arrived at Beagle Bay Mission in 1929 from Kunzendorf in Germany. Timber for the Lombadina church was gathered from the surrounding bush by Fr Augustus Spangenberg and Aboriginal helpers and then sawn by hand.

The Lombadina church was blessed by Monsignor Raible on the feast of Christ The King.

Following the end of World War II considerable work was undertaken on the roof at Lombadina church. With Fr John Herold, who had been interned during the war, installing corrugated iron over the paperbark roof which was left in place to help with insulation.

By the late 1950s both Beagle Bay and Lombadina Missions were reaching a point of crisis with many of the old priests suffering from failing health and no new missionaries to take their place. In 1959, Father John Jobst succeeded Bishop Raible and Beagle Bay and Lombadina Missions entered a new phase of activity. New schools, hospitals and housing facilities were built while the Lotteries Commission supplied equipment for the mission.

The sisters of St John of God left Lombadina Mission around 1968. Their role in educating the local Aboriginal children was significant and they are still remembered with fondness.

Many changes have taken place over the years. In 1984 the Lombadina Aboriginal Community were granted the grazing lease and assets of the Mission enterprises. There are now two separate communities side by side - Lombadina and Djarindjin. Both communities have their own independent administrations. The parish serves both communities. 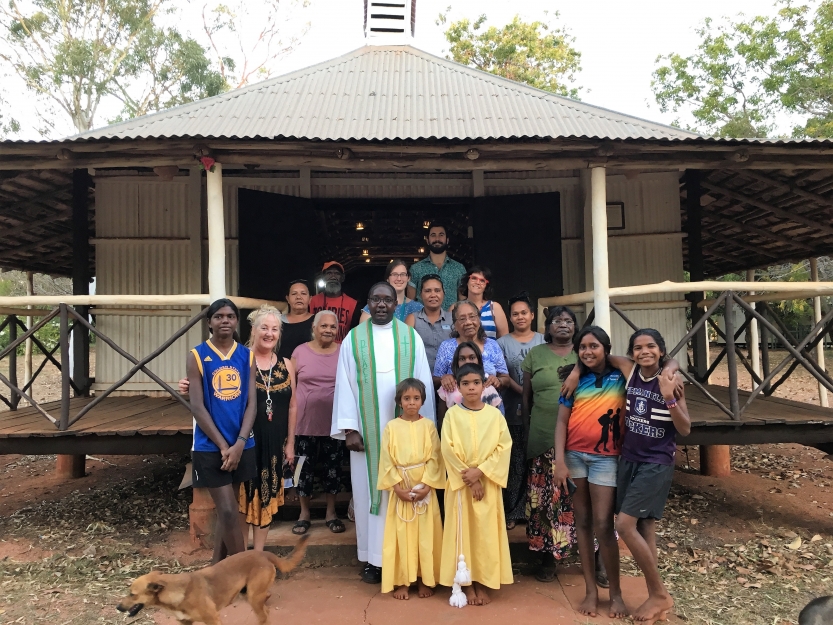 Christ The King Church today services the communities of Djarindjin and Lombadina. The church is the centre point of community life for Catholic community members. Our priests are based in Beagle Bay, but have an important presence in the community and play a part in guiding the faith journey of students at Christ The King Catholic School. They travel up here each week to say mass on Sunday and at other times to support school and community events. 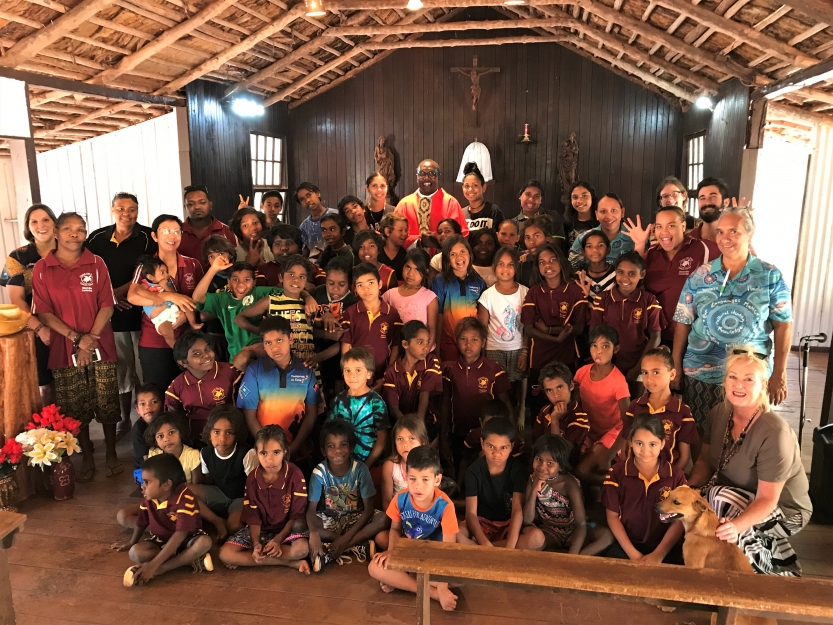 Christ The King Church is  is regarded by the Heritage Council of WA as a place of importance. It has been classified by the National Trust. It is considered a place is of aesthetic significance for the vernacular style, the use of local materials.
The Church has a bush timber frame, detailed on the exterior with vertical corrugated iron cladding. The hipped roof is framed with bush timber with corrugated iron cladding. The surrounding verandahs are roofed at break pitch. The interior ceiling lining in the church has exposed timber and paperbark lining the, the only one of it's kind still standing in the Kimberley.

Prayers of the Faithful 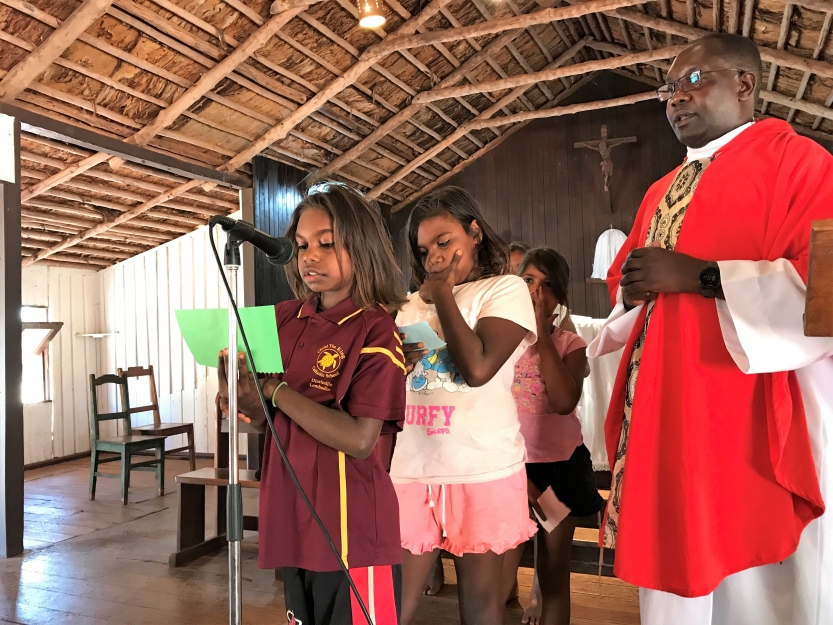 Through out the school year, each of our classes have a number class masses, as well as occasions when the whole school gets together with friends and family to celebrate the start of each term, sacraments, feast days and other special occasions. During these events, students take a lead role in the mass. They serve on the altar as well as taking on the readings and Prayers of the Faithful, which they write for themselves. 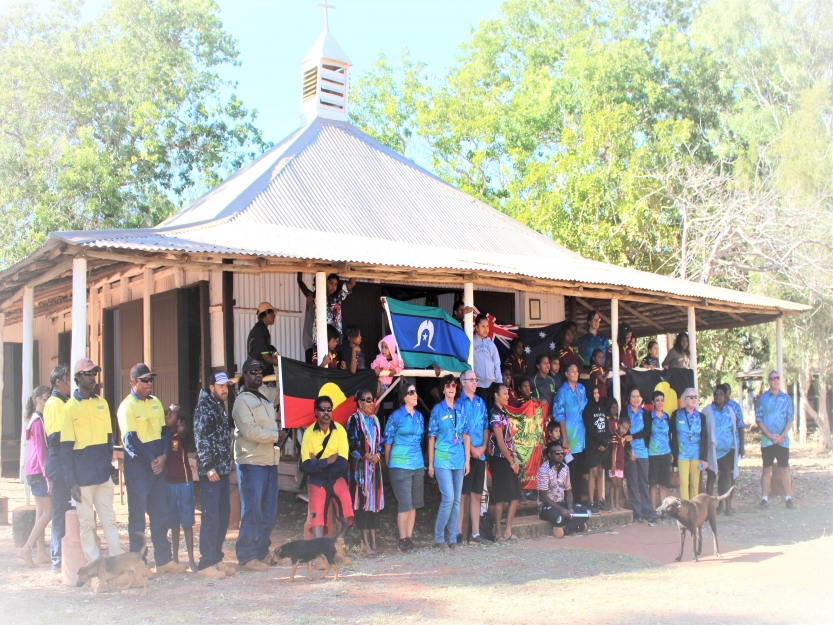 Every year, as part of our NAIDOC Week celebrations, we walk around the community carrying our school flag, as well as the Aboriginal, Torres Strait Islands and Australian flags. We pick up family and community members along the way and it is always great fun. It has become a tradition to stop in front of our beautiful church for a photo opportunity!

World Rosary #53 at the Grotto 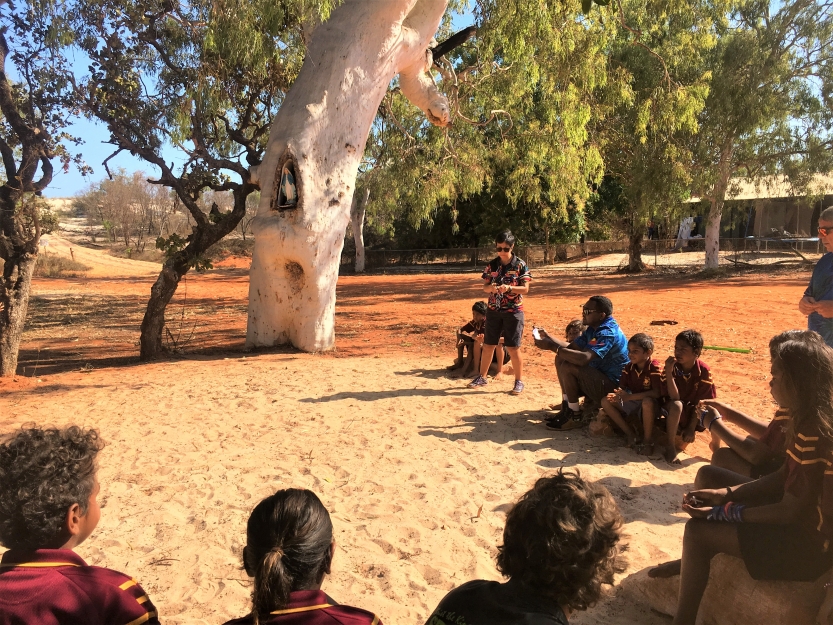 At Christ The King,  we joined with parishes around Australia and in other countries around the world to hold Rosary Rallies across the world
to celebrate the Feast of Our Lady of the Rosary. Together we call upon God, through the powerful intercession of Our Lady of the Rosary. Each nation has been asked to pray for its own intentions. The Australian intentions for the world rosary will be family-rekindling faith and continued Godly protection. We held our event at the beautiful Grotto at the foot of the sand dunes in Djarindjin.

Flowers for 'The Triumph of the Cross' 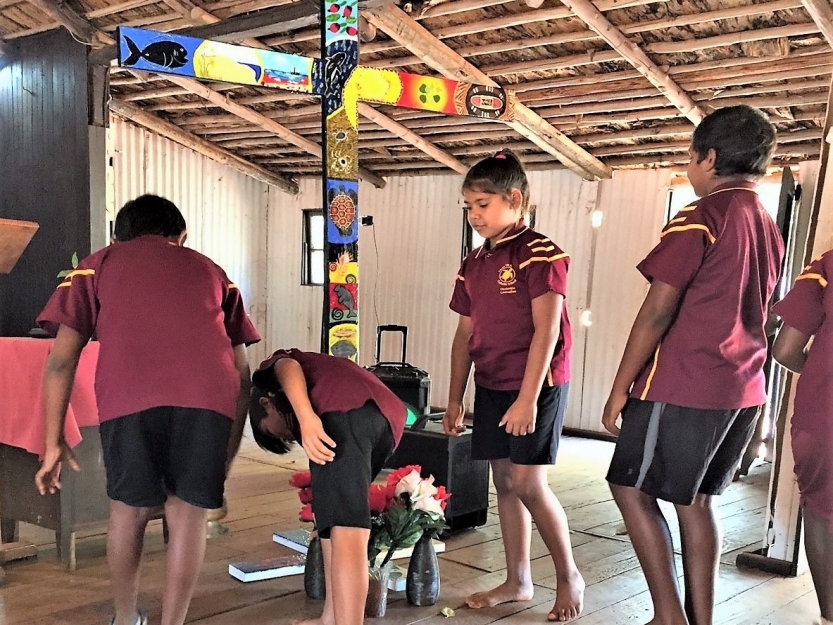 The Cross is ultimately a victory: the victory of God’s love.
It is the symbol of Christ Crucified, the power and wisdom of God, who conquered sin and death, and now triumphs over all that oppresses us as the Lord of all creation! We have hope, we have victory in Christ Crucified and his victorious cross.
At Christ The King we designed and created this beautiful cross. We invited community members to come and paint their own designs on its surface. The result is this wonderful, colourful and very personal piece that we have with us for most of our important events 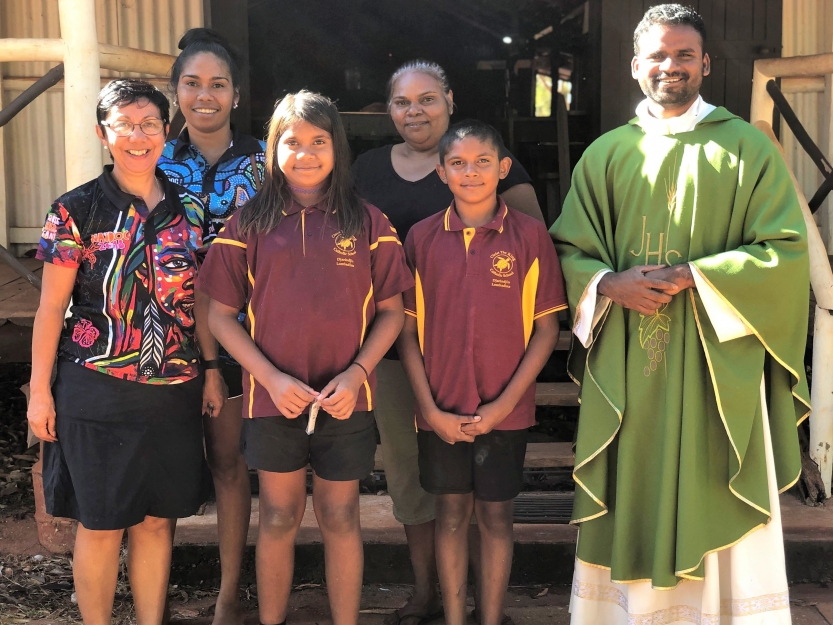